'Tis(n't always) the Season to be Jolly

Christmas is always hard for me. Even before dad, it seemed like Bad Things happened disproportionately often between late November and early January.

The thing that makes it hardest is that I really, really love Christmas, and I always have - but these days it makes me feel nervous, uneasy. There's always that nagging feeling that something terrible is about to happen. That, coupled with the little things that suddenly bring to mind all kinds of unwelcome memories of years gone by, mean it often doesn't feel like the most wonderful time of the year.

Continue reading »
Posted by Steph at 21:33 No comments:

It’s safe to say it’s been a pretty intense week.

There’s been a whole lot of joy. The feeling when you're taking the first tentative steps into something new, even if you’re not quite certain what that something will be, just yet. The unshakeable sense that it's right, at least for now. The thinking about what’s next.

But oh, how quickly something else sneaks in to try and steal that joy. Filling my head and heart with lies - the worst kind, the kind with a grain of half-truth at the centre. Something that happened before - or that may have been true in the past - that can't be disputed, now being used to paint a picture of a bleak and hopeless future. Pressing me to forget all of the goodness, and instead to focus on the one thing that I'm really struggling with. The thing that I find much, much harder than I'd ever care to admit, even to myself.

Continue reading »
Posted by Steph at 18:50 No comments:

Inspired by my good friend Joey’s blog over at Rhythms, I’m taking a break from my usual type of post to start an important conversation.

So, there’s something I’ve been meaning to say…

Continue reading »
Posted by Steph at 22:29 No comments:

"I know it's something God wants me to start living out, but often it's hard to know where to start."
Very nearly a year ago, my first post here talked a little bit about courage. About how I felt like it was time for me to start telling my story - but how that took a lot more bravery than I thought I had at the time.
What fascinates me most of all is that back then, my idea of brave was to write that bit of my story. Back then, honestly, that terrified me. And, if I'm being really honest, I still really struggle with making myself vulnerable. It just doesn't come naturally to me. Learning to have the courage to be vulnerable plays a huge part in what I've been learning lately, so I'll unpack what that means in more detail another day.
The thing that's really struck me, though, as I've thought about my journey over this past year, is how much my concept of what counts as "brave" has changed. I'm doing things now that even thinking about doing twelve months ago would have had me paralysed in terror.

Making Sense of the Chaos 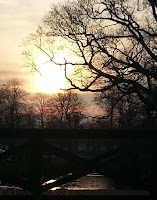 "What has been will be again,what has been done will be done again;
there is nothing new under the sun"
(Ecclesiastes 1:9, NIV)


Nor, it turns out, is there anything new in all of the posts I've been writing so far this year.

It's been one of those times, again, where everything's been a bit overwhelming. My 26 years of life so far have been a constant, steady stream of all-or-nothing, and this has definitely been one of the "all" times. So much has been going on at once, and I've barely had a spare moment to write any of it down. Things to do, things to read, people to meet, plans to make. Everything's felt new, fresh, exciting.

Except the funny thing is that, in all of the "newness", there really hasn't been anything new after all.

Continue reading »
Posted by Steph at 18:37 No comments:

Last time I shared here I wrote about the changing seasons: not just in the physical world around me, but in my own life as well. It turns out spring was a time to rest, and not write. Now summer's here, I have a sneaking suspicion that's all about to change.

Everything's been a bit quiet lately.

It hasn't been intentional; I've been working on quite a few ideas for posts. With all of them, it's the same problem: I'm managing the beginning and the middle just fine, but I can't get to grips with the ending. It's beyond frustrating for me, but I think I know why. I can't write the ending when I haven't worked out what it is yet.

The seasons are changing again. Winter is melting away and spring is sprouting up in its place - and not just in a literal sense. My priorities are shifting, and I'm catching glimpses of new things on the horizon. All of them exciting, some of them scary. Some new, getting my attention for the first time, and some old stuff from long, long ago, that's starting to make a bit more sense than it once did.

Nothing drastic, nothing that looks particularly dramatic from the outside. Just subtle shifts in my perspective, the way I think and where my attention is. But it feels like it's building, as if there's a gear-change coming.

It's interesting that it seems to be happening all over the place: my church is entering an exciting new season, and a lot of the blogging and social media spheres seem to be chattering away about the same things, too. There's lots of "newness" everywhere. It's looking like a season where God is clearly on the move everywhere. I can't even begin to articulate how exciting that is for me - that somehow, in some small way, I get to be a part of whatever He's got planned.

Hopefully, it won't be too long before I'm finding the endings, and I can go back to writing at my normal pace. I'm not going to force myself to post anything, just because I haven't for a month or so. I might, but I might not. I just don't know yet.

For now, I'll just enjoy the silence, and look forward to what's next.
Posted by Steph at 17:03 No comments: